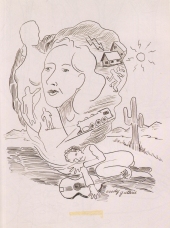 The folks at Woody100 (celebrating folksinger/trailblazer Woody Guthrie’s 100th birthday) posted a note on Facebook today asking people to chime in on a campaign aimed at having Google honor that occasion by making a custom “Doodle” on July 14, 2012. As you can see in my letter to Google below, I suggested using Woody’s signature political cartooning style. He was, after all, an illustrator too.

Anyhow, I’d encourage any Woody Guthrie fans in the world to join me in petitioning Google. It’s a fun way to take a break, anyway. You can email your request for Woody’s 100th to proposals@google.com.

Now for my full letter to the Google Powers That Be:

Hi there –
I hope this finds you well today.

I don’t know how you folks determine which people and things throughout history deserve a Google Doodle to commemorate their existence, but I’d like to put a good, honest word in for Woody Guthrie’s 100th birthday.

Sure, Woody’s been gone for 45 years, but his music has been played by everyone from Pete Seeger to Wilco to Sharon Jones & the Dap Kings. He was one of the first artists to straddle the crooked and precarious line between American pop and traditional music – attaching traditional melodies to contemporary ideas. The way he approached the folk music vernacular not only adjusted the way it was used in the 20th Century, but helped to define the directions it would take as the form marched into the 21st Century. There isn’t a singer-songwriter alive who doesn’t owe a certain debt to Woody Guthrie’s approach to the craft – whether they’ve received his influence directly from his recordings, or through the filter of folks like Bob Dylan, Bruce Springsteen, Ani DiFranco, Steve Earle, Jeff Tweedy, Joan Baez, or any number of other artists who have recorded and interpreted his legacy through the years.

And anyway, considering all the political muck and economic woes getting tossed around these days, it’s a good time to reconsider the work of someone like Woody Guthrie – a guy who found beauty and hope in the chaos of the Great Depression and created songs which reminded us of what we do best when we work together. It’s a good time to remember that sort of thing is possible.

What’s more, Woody was an insightful and humorous cartoonist. I can imagine your illustrators could have a field day adapting his signature political cartooning style to a Google Doodle.

In fact, I went ahead and pulled up a page full of his illustrations, using my trusty Google Searching Machine. Here you go.

Finally, beyond being a great songwriter and cartoonist, Woody was a fan of equal opportunities, everyone getting a fair shot. I have to believe he would have delighted in knowing there was a way, in the future, for everyone in the world to have the same access to all the information in the world. I don’t think it’s going too far out on a limb to imagine Woody would have been a Google fan.

So, there. I’ve made my case. Thank you for considering this, whichever way you decide to go with the Google logo on July 14, 2012 – what would have been Woody Guthrie’s 100th birthday.

This entry was posted in Work. Bookmark the permalink.

One response to “Campaign for a Woody Guthrie Google Doodle”