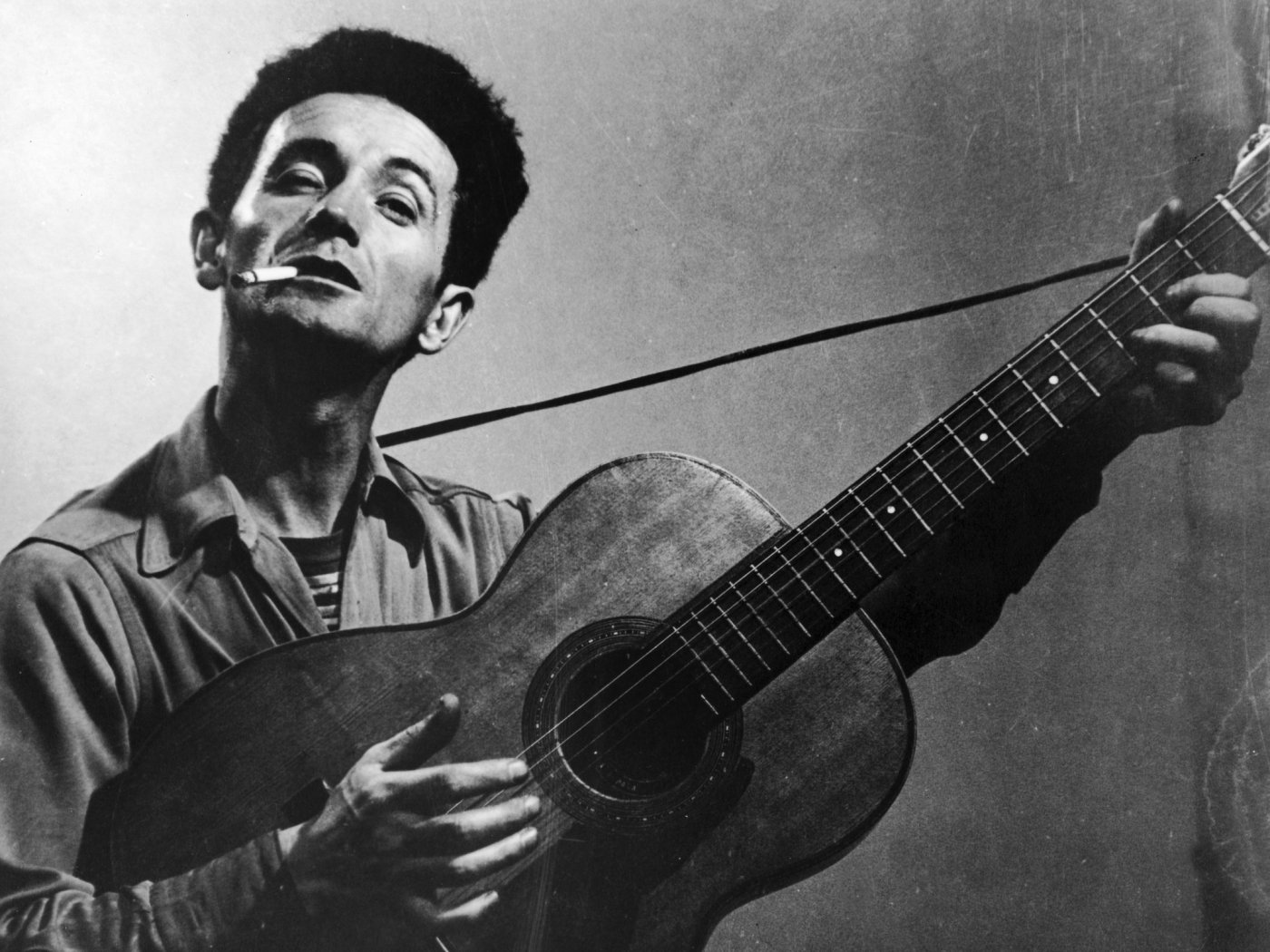 Originally written for No Depression

It’s hard to really imagine how life was in 1912, having not been there myself. From this end of the internet, it’s a sepia-colored place where everyone dressed a little less casual than they do now, looked either freakishly dapper or remarkably filthy, but always proud and probably at least a little tired.

Woody Guthrie wouldn’t be able to say much about 1912 either, having only just arrived in the world that year himself. But he certainly figured out a way to talk about everything that happened after that.

He was a jack of all trades for a while there, painting big bubble letters on the windows of local businesses for cash. He was a fortune teller for about a minute. He went looking for gold in Texas of all godforsaken places, not really convinced he would actually find it, I imagine, as much as he was probably just interested in how it would feel to be in the middle of a story where a group of men looked for gold.

People got together, they made music.

That he came from a family of fiddlers, banjo pickers, guitar toters, and jaw harp twangers hardly set Guthrie apart in his day. It didn’t even make him think anything of his ability to do all these things. He had been a young man married out of his family’s house for some time before it ever occurred to him to try to make music for a living. Had it not been for his cousin Jack, maybe he never would have gone there. Who knows. That might be debatable. I’m no Guthrie Scholar. But I do believe he was an opportunist. He did the songwriter thing because that’s what worked out for him. After a while he did it because it was expected of him, because Moe Asche was kicking him cash to do it.

How Woody Guthrie ticked, what motivated him, is perhaps another topic for another time. After all Joe Klein and others have done a splendid job at that already, with their books.

I want to talk about what Woody Guthrie did, probably mostly on purpose, but a little bit inadvertently, for people like me and you.

First of all, before Woody Guthrie, singers and songwriters were separate people within the music industry. Certainly, out in the world, people sang songs they wrote all the time. But, in the music business this was not something that was done, and it definitely wasn’t normal. Popular music fans didn’t have ears for folk music. Part of what got Guthrie as far as he got in his brief life was that he understood how to be a charicature of himself without disrespecting himself – or Okies in general. He knew nobody in New York City was going to open their ears for a wickedly articulate editorialist Commie with ideas about labor and feminism and civil rights and the distribution of wealth in this country. But if he made himself a bit of a novelty act, he could sneak in verses about property ownership and welfare lines. He could talk about what’ll happen to you in California if you ain’t got the do re mi. He did it with humor, sure, but he also did it with a certain amount of no-bullshit. He was a handsome man, sort of, but small, with a somewhat misshapen arm and a certain coyote quality to his voice which wasn’t exactly what you’d call beautiful, but had an intrinsic musicality about it.

He couldn’t make this stuff up, basically. Even though he played up the Okie for the cameras, hammed up the redneck, there was nothing inauthentic about anything that happened once he started strumming that guitar.

Plus, there was something about him. People had pilgrimages around the guy. Ramblin’ Jack Elliott showed up one day and just stuck around. Pete Seeger wasn’t exactly his pilgrim, but he certainly stuck to Guthrie’s side trying to learn everything he could. They started the Almanac Singers together.

A few years ago I got to interview Bess Lomax Hawes – daughter of John Lomax, sister of Alan, an Almanac Singer herself, among countless other things with which she could be credited. I’ll never forget her telling me about Woody and Pete at the kitchen table in the early 1940s, debating over whether there was any sense at all for music to be overtly political. This was a group of people who were some of the original path-forgers in what would later become a national topical song movement.

Pete always had a knack for getting people to sing things they always believed but would never admit in a conversation. Guthrie, for his part, tended to stick to telling stories. Stories about military ships sinking. Stories about criminals trying to fend for themselves and their families. Stories about rivers flowing and dam workers busting their backs. Stories about farms getting buried beneath high winds. Stories about soldiers and driving cars and feeling reverence toward beautiful women. Stories about Jesus and, yes, stories about people standing in a welfare line.

He sang stories about everyday life in America – things people actually did and thought about and worried about and accomplished. He gave an authority to The Folk which had been missing from popular music. He made it okay to speak for those unsure of their own voice.

For a guy so focused on giving voice to the speechless, his inability to communicate toward the end of his life must have been a special kind of suffering. Indeed, Guthrie died in 1967 after a long battle with Huntington’s disease. But the way he approached his work – the regard he had for the stories, his emphasis on the common life lived in earnest, the importance of the average person just getting through their day and the strength we all possess to change something if we can change our own minds – all this became the standard for being a folksinger in America.

You look at anyone who’s come along since and you’ll see it. Bob Dylan, of course. We all know that. But the influence stretches much farther – through the fingers of conscious hiphop, to the ruminations of overt activist songwriters like Ani DiFranco and Steve Earle, and beyond.

But, his influence aside, perhaps what’s most remarkable about what Woody Guthrie did is that he created thousands of songs to address just about anything anyone could ever find themselves in the middle of. He gave us a foundation of music from which to draw in the moments when we don’t know what to say or think about what’s going on. He gave us songs for welfare lines and picket lines, for immigrants and women and those who feel stomped on. He gave us songs for people who work on farms and those who work in factories, songs about raising money and being outraised and outraged.

Where the photos seem to tell of people long ago and far away, we can sing the songs and they still make sense right now, right here. Maybe that’s unfortunate – that we haven’t yet solved all these things. Then again, there’s comfort in knowing this isn’t the first time around, and hopefully we can take a bigger step toward a bigger risk with greater confidence now that we don’t have to start entirely from scratch.

Woody liked to tell a story about a couple of rabbits being chased by a pack of wolves. After running and running and hopping and hopping, they started to feel tired, like it was futile, and they’d never be able to outrun the wolves forever. So they ducked into a hollow log and waited. One rabbit said to the other, “What are we gonna do in here?” And the other rabbit said, “We’re gonna stay here and do what rabbits do best, until we outnumber ’em.”

That’s what I’m talking about.

Happy 100th birthday to Woody Guthrie, and thank you.

One thought on “What Woody Guthrie did”